Versions in Adaptive Insights. What are they? How best do you, as an administrator, manage them? And what other, lesser-known features of versions can you leverage to create a more intuitive and bespoke planning experience?

A version is simply a collection of models and data that represents a financial scenario of your business. Your Last Year Budget, Current Month Forecast and Long-Range Targets are all examples of versions, which are created, populated and analysed in Adaptive Insights.

Go to Modeling > Versions to see your versions and their settings: 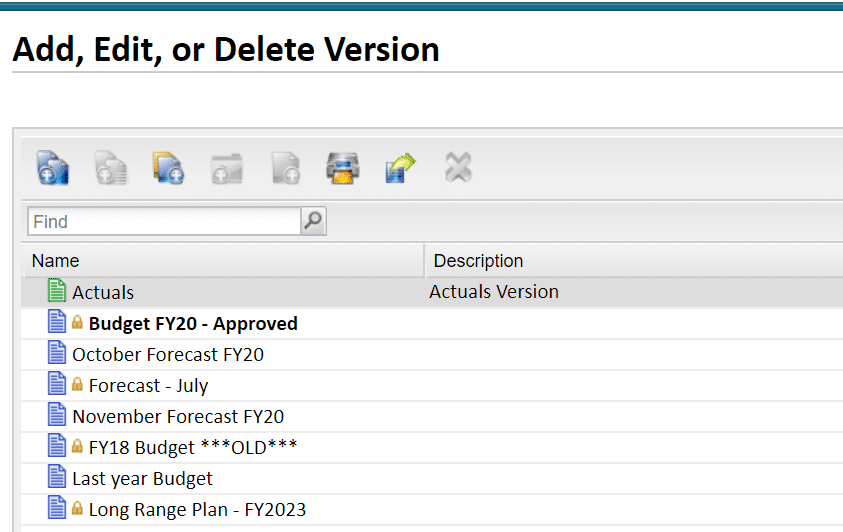 The number of versions in your Adaptive model doesn’t have a material impact on its performance, so you’re welcome to create as many versions as you’d like.

However, the more versions you keep, the more important it is to store them in a clear, organised way. This avoids confusion for your users when contributing to budgets and running reports.

How often do you get emails from your contributors with questions such as “What’s the current version again?”, “Which budget version should I use for variance reports?” or, the dreaded “I’ve entered data into the wrong version, can you help?!”.

Alleviate yourself from those time-wasting concerns by following these organisational tips:

Clear, consistent naming: Having a consistent naming convention for your versions will make it easier for your users to follow. I tend to use ‘[Time] [Plan Type] – [Additional Info]’, eg, ‘FY19 Budget – Board Approved’ or ‘FY2020 September Forecast’. It doesn’t matter what the convention is exactly, so long as it is consistent and intuitive.

Folders: Make use of the folder feature to better organise your versions. I find the best use of this is to create folders for each financial year. Take it a step further by creating subfolders by plan type: one for budgets, one for forecasts, etc.

Ordering: Don’t be a slave to the default order in which Adaptive Insights places your versions. By default, a newly created version is placed below the existing version from which it was copied. This can be counter-intuitive, as you want the most recent version placed at the top of the list for easy access. Simply drag-and-drop your versions to rearrange the order. The same goes for your folders; always ensure your current year’s is at the top. 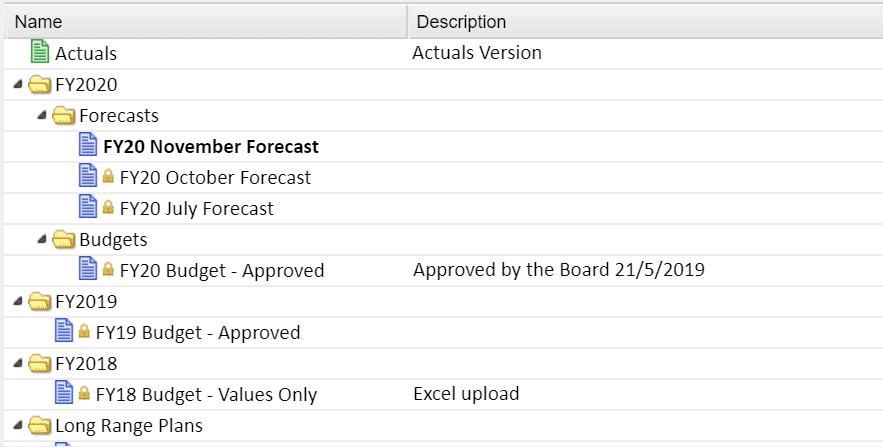 It is incumbent on the administrator to not just keep versions in an organised fashion, but to manage and review their settings from one plan period to the next. For example, see the tips below on the settings for retiring your active versions.

When versions are no longer used (eg, prior year budgets or forecasts) we recommend retiring them using the following settings:

Lock the version: This sets the version’s data and formulas to read-only.

Check ‘Calculate Formula Values’: Whilst the formulas cannot be edited once you lock the version, they still calculate each time that version is run in a sheet or report. This is to be avoided for two reasons:

Checking Calculate Formula Values will evaluate all formulas in the version and store the resulting values. It will then use those values when running a sheet or report, instead of relying on the formulas to recalculate.

For older versions that have become obsolete, consider hiding them to reduce clutter in your version drop-down. An efficient way to do this is to:

Each version placed under the Archive folder will instantly become hidden from sheets and reports. This creates an easy, drag-and-drop process for handling your obsolete versions. 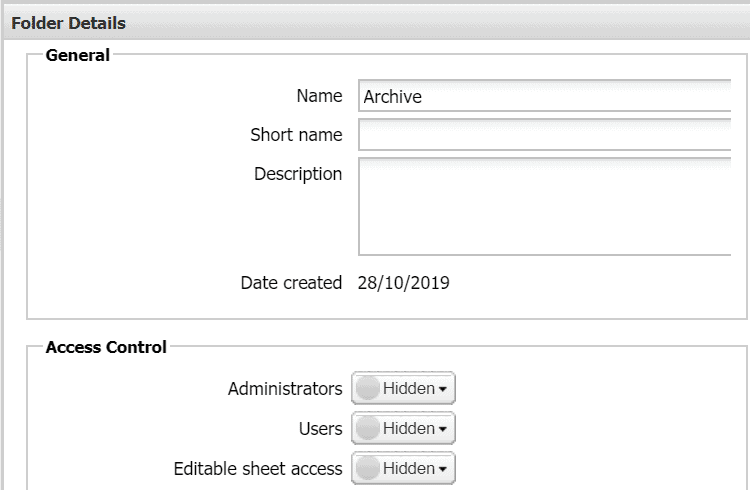 Beyond the standard settings of version, there are other features at your disposal which can be used to better enhance the planning experience for your users.

The majority of active versions I come across, whether they are budgets, forecasts or what-if scenarios, are designed to be used for either:

Whichever category your versions falls into, it is straightforward to achieve the desired level of access by tweaking the Access Control settings for Administrators and Users.

However, what if your version is in the minority? For example:

In these instances, Administrator and User access settings are too vague and will include users outside our target audience. Define User Groups to get around this issue!

Your version will now be accessed only by the users defined in your user group. You can edit the members of this group at any time by returning to Administration > Global User Groups.

A more common issue involving versions that I hear about is the pain of updating reports with the latest version when a new planning cycle begins.

Imagine your team of users is taking full control of Adaptive Insights’ Web Reporting portal. Amongst them, they have created over 50 operational reports which are used to compare actuals with the current monthly forecast.

Next month however, when a new forecast version is created, all the reports will suddenly become out of date. This creates the need to manually modify each one and update it with the latest forecast version.

There is a more efficient way to ensure your versions are up to date with the help of virtual versions.

Virtual versions were originally brought in to give users the ability to view data of an existing plan version (the ‘base’ version) translated using the exchange rates of another version (the ‘exchange rate’ version). This was particularly useful for multi-currency entities conducting FX analyses.

However, people soon realised that they can have a more generic but useful purpose – as version ‘variables’ that could point to your current plan version and then be used for reporting. Once a new plan period begins, you simply point your virtual version to your new plan version instead of modifying each report.

For example, imagine your current version is ‘FY20 November Forecast’, of which we would like to create a virtual version to use in reports:

Not only is this a much quicker method of updating reports, it is more controlled and consistent. The process updates all reports simultaneously and is now left to administrators to manage, who are better positioned to know which is the current plan version. 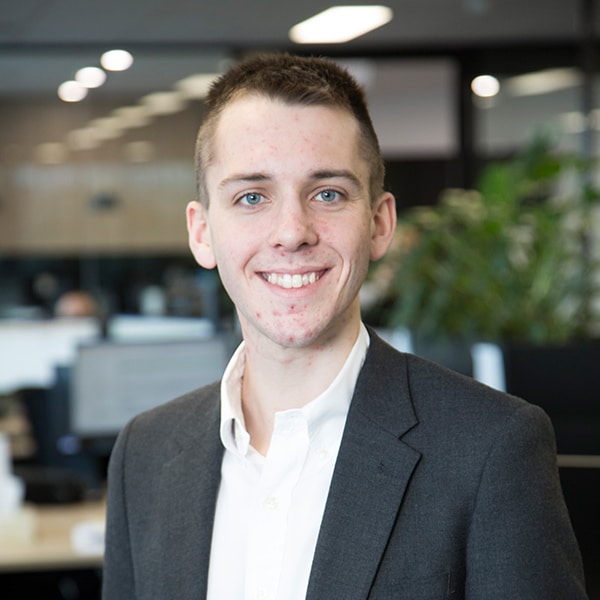 Getting Ahead of 2020: Impactful Board Reporting

Finance leaders, ensure you’ve set up the reporting you’ll need to be successful this year. Join this free webinar with FP&A experts who will share their experience and best practices.

Board Reporting with Adaptive Insights OfficeConnect: SACA use case

The South Australian Cricket Association used Adaptive Insights OfficeConnect to create their monthly reporting pack. Walk through their process from scoping to getting buy-in and implementation.

The Adaptive Insights suite offers intuitive, self-serving reporting platforms that provide a live link to your data. Learn how you can make the most out of Web Reports.